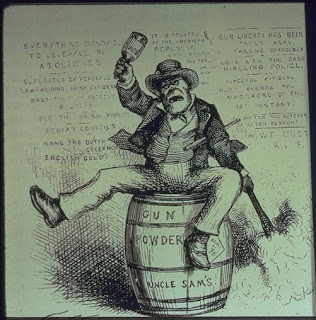 Mark Twain has been highly criticized throughout the years for his work, The Adventures of Huckleberry Finn, which uses the publicly dreaded “n-word.” Scholars and literary specialists find much controversy over the use of the “n-word,” especially because Twain decided to enter it into his text over 200 times in The Adventures of Huckleberry Finn. However people may decide decipher the purpose of Twain’s use of the racial slang commonly referred to as the “n-word,” there is no denial of the breakdown of some barriers in the literature in regards to race. Yet, not just in The Adventures of Huckleberry Finn did Twain insert racial problems that were present during his lifetime. In the short story, A Day at Niagara, Twain points towards the political problems of the Irish immigrants and potentially at how they were used in mid eighteenth century America. As during the times of the Civil War, racial politics concerning African-Americans and Irish Immigrants were very similar, without the Irish being enslaved people. In Twain’s A Day at Niagara, the narrator of the tale is visiting the falls of Niagara and is looking forward to meeting with the “noble Red Man” (Twain, 19). However when the narrator finally meets the Indians he is searching for, with a very over the top greeting, it turns out that the man is not what he thought the whole time. The narrators greeting was not accepted well, with the faux native replying with “An’ is it mesilf, Dennis Holligan, the ye’d be takin’ for a dirty Ijin, ye drawlin’, lantern-jawed, spider legged divil! By the paper that played before Moses, I’ll at ye!” (Twain, 19). This clearly shows that the man was not an Indian at all, but an immigrant from Ireland. This personifies a problem of this era, that the Irish man was poorly treated and subjected to a mockery of a job. Twain puts this in very subtly, which can sometimes be looked over very easily. However, A Day at Niagara was authored by Twain in 1869 when the mistreatment of Irish immigrants was very real. The problem that many have in seeing this hint dropped by Twain in his short story is that the mistreatment of the Irish is looked over in American history because of the immense problems faced by the black population in America during the Civil War Era. The question is whether Twain was using this portion of his tale to address other problems of the era, which seems to be true. Although the adding of the Irish as faux Indians is important to the plot of the story, it also addresses the problem of immigrant politics. How was the narrator supposed to know what was going on, because most likely during this period upstate New York did not carry a heavy population of native Americans. I feel Twain did this purposely and in a very low-key matter, and I applaud him for making strides to address other racial issues than just the problems of African-Americans. Having said that, I do not want to take away from the problems faced by African-Americans and the strides made by them to find equality. I applaud for Twain for being able to make several points in different instances about racial politics.


picture citation: http://en.wikipedia.org/wiki/File:TheUsualIrishWayofDoingThings.jpg
Posted by K. Merchant at Wednesday, May 04, 2011